Behind the Art | “Burning Down the House” “Burning Down the House” features seven figures dancing in a fiery circle. I had been contemplating one of the acronyms of GOD, which is Generator—Organizer—Destroyer. My original idea was to explore the Destroyer and the notion of destruction: what has to be demolished, dismantled, or burnt to the ground before something new can emerge. Out of that came the final meaning, which is “renovation.” A lot of destruction in the world seems senseless and tragic, rooted hatred and acts of war. Some destruction is practical and even necessary, such as demolishing a ruins to clear space for something new. That’s the tactic I took: destruction that serves renovation or renewal.

It came to me in a vision to depict this energy as a woman fighting back, lighting a fire large enough to burn the sky. She fights against oppression, against her own inner demons. She destroys everything useless in heart and mind: the ideas, attitudes and beliefs that held her back—including her own excessive anger. I wanted to show a maiden who is not afraid to play with fire: fire is a natural part of her environment, vital to her life, and not to be feared. Fire has an intrinsic power to reshape without anger. It even has a playful side, a dance of shifting shapes. Dance is the obvious way to amplify this idea of renovation. Olivia, the model in the piece, is a highland dancer with great kicks and pointed toes. I wanted her to appear like a sprite or fairy, in stark contrast with traditional depictions of destructive deities, such as the Hindu destroyer goddess Kali or the Judeo-Christian Satan. 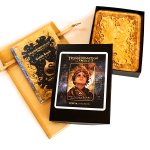 This artwork was created for the TRANSFORMATION ORACLE. Destruction is the first event in the transformative power of the FIRE element. Fire is activation of the spiritual journey. We must destroy illusions and old, useless things before we can become new individuals. As a teen, I had a poster of the painting “Hylas and the Nymphs” by John William Waterhouse. The Pre-Raphaelite paintings are to me the visual counterpart of Rachmaninoff’s music, in that they are very romantic and appealing to young adults. I fell in love with the maidens and studied them for hours. The painting tells a story. On close examination, it’s clear that the artist used the same model as reference for several of the nymph figures. I loved how the maidens seemed to dwell in the realm of water – as though they were “in their element.” I mused about showing maidens in other elements, such as fire…

I became fascinated with pantheons of gods and goddesses in different cultures around the same time (age fifteen). I liked the idea of personifying the forces of Nature through different human-like beings. At some point I learned of the wrathful Tibetan Dakini, in whom fire and blood are intermingled in dance. The vajra (dancing) Dakini’s volatility is exciting to me, in contrast to the very limited female figures in Western religion. I liked the red Dakini’s power to dance souls up to the sky.

A more recent inspiration is the work of my contemporary, Himitsuhana (Chiara Fersini). Her works expand the tradition of surrealist photography into the digital age, and are important torch-bearers for the “Selfie” age. Her piece called “The Fifth Sun” used a locked camera to create a celestial ellipse touched by the hands of the figures (herself). The tromp l’oeil and impossibility of Himitsuhana’s work spoke to me. I loved the surreal circle and the same figure repeated over and over. I wanted to explore a metaphysical, transformational reason for a woman to jump in the sky…

(L) The source photo. (M) The mask used to remove the dancer from the background. (R) The final dancer.

How I Did the Photo SHoot

The principal photography for this piece was done on a friend’s farm in Erie, Colorado, June 5, 2014.

That same afternoon, I did principal photos for “The Narrow Gate” in the northern field, then turned to the southern field for “Burning Down the House.” The evening light had changed and I wanted sunlight to the right of the dancer. We started this shoot around 6:30pm, on a long day with sunset scheduled around 9:00pm. I set my camera on a tripod, low to the ground. We defined a circle in which Olivia (the model) could dance, and I directed her to leap into the air, tossing the scarf overhead as though it were a sort of torch. The gesture was to ignite a fire overhead (this was the Vision the spirit guides had given me for the piece). Olivia’s costume was a yellow blouse and white skirt. The scarf she tossed in the air was fiery red and turquoise. It was a clear day. 1. The dancers over a preliminary background of clouds and sun. I hand-painted the colors of the dancer’s dress and also the scarf. The fire and flame imagery I shot the summer before, at the Great Sand Dunes monument where I had camped with friends. That summer we had terrible wildfires. The sun was red from smoke and ash, as was the moon. I was very impressed with the destructive effects of these fires in the West, how even the sun could be obscured. So I made many studies of fire and flames in the camping pit. The red sun inspired my use of the planet Mars in the painting. The flames were shot in close-up, so they make the dancer seem small when the two scales are juxtaposed in the final piece. I had intended the dancer to be a sprite (a tiny supernatural and fairy-like creature). I didn’t want her to have traditional wings – the fiery scarf and her leap achieve the feeling of flight. 2. Dancers over ruins & smoke. Fire was composited over the scarves and the sun tinted red to create Mars.

The ruins are from a castle from a trip to Europe in 1988. I’ve always been intrigued with ruins, how they evoke what has come before. Sometimes we remove them completely and other times we leave them to stand as a monument to the past.

When I lived in New York City, I watched many old buildings be demolished, while others were renovated and restored. Once, when I lived on the 17th floor of a high rise on Union Square, the building that had formerly housed Luchow’s restaurant on 14th Street caught fire below me. 3. The dancers’ skirts and tops are hand-painted to amplify the fire.

I watched for a long while as firemen operated on the building. It reminded me of emergency room doctors dealing with a triage patient. The old building was destroyed. I thought about the history of 14th Street, what that building had once been, its many incarnations, and how it was now gone making way for something new. It seemed like a metaphor for psychological transformation, which often involves a slow destruction of the old self—sort of a burning away of false and useless beliefs. At the end of this process, very little of the original personality remains. One has to start again from the beginning. It can be a very good experience in the long run, to rebuild a new and more open self from the ruins of the former self.

What I Thought Of As I Created This Piece

How do you get to the light? You go through great darkness first.

The theme of destruction has appeared many times in my life, in many different forms. The details aren’t important. Every person goes through loss, destruction, health issues and so on. What matters to me is how an individual is touched by the artwork, how it intersects with his or her own experience and spiritual growth.

That said, I have a neutral mind about destruction. Though I have gone through big emotions during times of destruction, I don’t regard it at all as a bad or terrible thing. I meditate regularly on life and have found through contemplation a deep peace about how this world works. I hope to convey serenity and acceptance to people, to help them integrate every stage or phase of spiritual growth and not to simply classify some as “good” and others as “bad.” To that end, I took the subject of destruction and gave it an unconventional lighter touch, to offset the difficult aspects and remind people of the importance of seeing the whole picture: the blessings that can come when the old is demolished for the new. 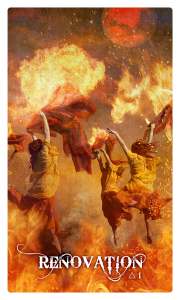 My home has many images of destruction and chaos. I have been fascinated by computer renderings of chaos and our ability to study chaotic patterns through computation. I have a piece by my friend, the artist John Vega, which is a study of a portal through chaos. I also have Tibetan Buddhist tanka paintings of the protector god Mahakala and the destroyer goddess Kali, among others.

The acronym for GOD that I like best is Generator Organizer Destroyer – a 3-part god in which destruction is a natural part of the cycle of life. We all die. Autumn and winter follow spring. Night follows day in an endless cycle. Destruction is the beginning of rebirth.