Behind the Art | “Walking Coyote” Most of us struggle with our identities. Our parents may be of different faiths, nationalities, races, or political beliefs. We may have a public self and a private self whose basic values and needs are at odds with one another. Few people have a rock-solid identity with integrity to the core. The beauty of this problem is that our inner conflicts give us valuable insights into the lives and identities of others.

As I was making the TRANSFORMATION ORACLE, I came across MJ, a young man who was half Cheyenne, half Caucasian. He grew up on the Northern Cheyenne Reservation in southeastern Montana, yet now works at McDonalds on the Front Range of Colorado. His blood is mixed, as is his cultural experience. To which family, which people, does he belong? Perhaps he belongs to all people: he simply belongs to this world—as we all do. Once we unhook ourselves from our tribal or cultural groups, we open to the common ground shared by all humans.

The United States of today was formed by immigration. We forced the Native people to adapt to our way of being, making them cultural immigrants on what was their own land. Today’s world migrant situation compels us to wrangle with different religions, languages, and customs. Will we respond with tolerance and understanding, or hatred and rejection?

(L) MJ as he looks today. (M) Preparing the image of Walking Coyote, along with layers in Photoshop. (R) The final artwork.

How I Did the Photo Shoot

The principal photography was done against a blank wall with natural light during the summer of 2014. It involved two characters: the MJ of today, and his ancestor spirit Walking Coyote, who lived by the old ways before being forced onto a reservation.

The main challenge was to get MJ, who had never posed before, to call upon his ancestor Walking Coyote, with whom he shared the same name. MJ went deep inside to conjure his great great Grandfather, a mighty warrior, who had survived by hunting, without any of today’s comforts and conveniences.

For Walking Coyote, MJ wore a long black wig and doeskin wraps, along with a Native necklace, vest, and shells. MJ had earned his eagle feather from Northern Cheyenne Elders. He was adamant not to let me, a woman, touch it, so my husband tweaked it into position.

For the contemporary character, MJ wore a bright plaid button-down shirt. The background was a graffiti wall I’d seen in Brooklyn, a city built upon immigration from all four directions of the world. 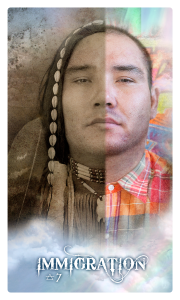 The Immigration Card from the Transformation Oracle by Sonya Shannon. The photographer Edward S. Curtis spent much of his life capturing images of Native people in their tribal finery. His images are a remarkable catalog of the personalities, clothing, and ways of life now vanished. The proud or fierce facial expressions show the spirit of people who survived on this land before Western ways irrevocably altered it. Details of animal bones, fur, feathers, and shell, along with quillwork, beadwork, weaving, and braids spoke of the sacred symbols and stories of the Native tribes.

I was intrigued by the canvas background in many of Curtis’s photographs. Though he took many photographs of indigenous people in landscapes, Native villages, or doing daily activities, Curtis often used a huge cloth as a backdrop. With this neutral background, natural light gave the photographs a distinctive look, often with strong contrast of light and dark on his subjects’ faces. The cloth homogenized and simplified these images, putting the focus on details of posture, clothing and hand-held objects rather than on location.

What I Thought Of As I Created This Piece

What happens to your core self when you move your entire life to a different country and culture?

I arrived in the “Wild West” of Colorado after many years in New York City. Before that, I immigrated to the United States from Canada. My father immigrated to Canada from Germany. I grew up with two languages spoken at home, with a connection to the Old World through my grandmother and others who remained in Germany. We celebrated a German Christmas on Christmas Eve and a North American one on Christmas Day with my maternal grandmother in Toronto. I’ve done rural and urban, been a country girl and a big city woman. Both identities fit: they are like different clothes worn for different occasions. Underneath, there is only one person.

Some of us know our ancestry back many generations. Others of us are orphans, or only knew one parent. We all need to belong somewhere. As families change and people move far from their original homes, our sense of identity also transforms. All families and cultures have something of value. What we take from our experience—and what we leave behind—defines us more than conventional measures of nationality, race, religion.

How do you learn to walk in another person’s shoes? Acceptance of others starts with acceptance of our whole selves. When we reach beyond old, limiting identities, we find new family and identity of choice, based on inner values and made strong by compassion and understanding. canvas wrap has an inspirational message of tolerance around the edge.
}