Mystic Musings | I Met My Sister 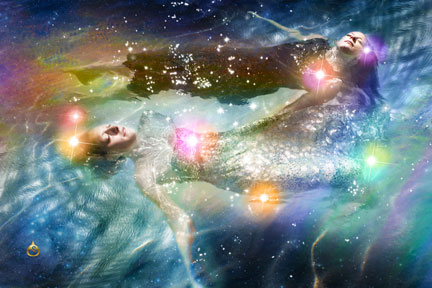 I met my sister after we had died.
We had grown together,
Craned our necks across crowds to smile.

The world was fixed in frantic motion,
Slashed and painted, harsh as glass but
We were strong,
Moving in prehistoric bath, and smiling:
An eye within an eye within an eye
Within.
She had grown young again, a sunny frown
at the disquiet in her body,
Weeping for another sister
Who was calling through the water.

Points of reason, lines of sight:
What are points of light but stars’ atoms?
Points of reference, lines of divergence:
What are poles of disagreement but
Points of view, taken from opposite stars in the Heavens?
What are sisters, but versions of daughter,
Written as the hand writes an identical character
Never twice the same?”

My sister’s face became the moon,
And glazed men’s eyes, who saw her.

“And all the other women, why not look at them
And smile?”

I grew old as the earth, under her new knowledge,
And died with the shards of a million arguments
Inside my voice.

We were born again.
We were not divorced.